Warning: Use of undefined constant is_robot - assumed 'is_robot' (this will throw an Error in a future version of PHP) in /home/biohyd5/public_html/wp-content/plugins/post-views/post-views.php on line 594

Camborne School of Mines is Recruiting!

We are currently advertising seven lecturing positions. Details below:

PhD studentship: From whole algae to crude oil – an interdisciplinary approach to tackle mine waste.

A 4-year NERC-funded PhD position, to start in September 2015, is available at the University of Exeter. This multidisciplinary PhD will combine environmental biology, microbiology, bioenergy, hydrometallurgy and phycology, and will provide the student with excellent training for a research career.

Water pollution is a major global problem and accounts for the deaths of more than 14,000 people per day. It is speculated that lack of clean water will rise to catastrophic proportions by 2025. It is estimated that then, 1.8 billion people will be living in areas with absolute water scarcity and two thirds of the world could be facing drinking water shortages.

The increasing world population not only puts demands on the presence of clean water but also increases reliance on the Earth’s resources. Mining has well-publicised deleterious environmental consequences and contributes greatly to destruction of landscapes and the pollution of water. This is mainly through the generation and uncontrolled release of acid mine drainage (AMD), a highly polluted water runoff from operating or abandoned mine sites. It is caused by the biological weathering of sulfide minerals exposed during mining operations. AMD is highly acidic (pH <3.0) and transpo 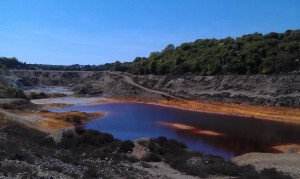 rts heavy metals such as iron and copper and metalloids such as arsenic from the mine into the wider environment and watercourses. It is a significant environmental problem often requiring expensive and on-going treatment long after a mine has closed. Up to 1,000 km of rivers and waterways are thought to be affected by AMD in the UK alone.

Thus far, algae have been trialled to remediate AMD but these systems are not competitive with chemical treatment (rate-wise) or compost wetlands (cost-wise). Additionally, challenges in algal fuel production include low growth rates, high costs of drying and lipid extraction.

However, thermochemical conversion of whole microalgae into biocrudes, which can be further upgraded into chemicals and fuels, offers a highly credible route to cost-effective fuel production. Here, oil is formed from the entire biomass, allowing use of non-lipid producing algae more suited to bioremediation. Additionally, a secondary concentrated waste stream containing heavy metals is also produced, suitable for reprocessing and additional valorisation.

This project is part of the multi-disciplinary AVaRICE project (www.avarice.org.uk) and would suit applicants from a variety of backgrounds.

For further information on the project and the position, please use the contact either Dr. Mark van der Giezen (www.vandergiezen.org/) or Dr. Chris Bryan (www.exeter.ac.uk/esi/people/bryan/). Interested candidates with a good first class honours degree, or equivalent, are strongly advised to contact the supervisors prior to the deadline which is the 15th of January 2015 (further details on how to apply will become available shortly).

Biohydrometallurgy as a remedial option…

I think this is a real future niche for biohydromet – these can be the win-win situations we look for.

In many ways, this is what really inspired me with the Kasese operation in Uganda. While cobalt recovery was the primary driver in that case, the result is less reactive residues. BacTech are ostensibly putting the remediation first, but (I presume) will not go ahead if the value of the metal recovered does not cover the OPEX and CAPEX.

We have looked into the use of accelerated leaching of heap material to reduce the time scale of AMD production while I was at UCT and I do think there is scope for biohydromet as part of a larger remediation strategy. Even if the value of the metals produced don’t cover the full cost of the leaching operation, so long as the overall position is remediated (i.e. less active) mine waste the recovered value can be seen to offset the cost of remediation (which is necessary in any case).

Posted in Acid Mine Drainage, Biohydrometallurgy, Mine and Mining Environment Biotechnologies | Leave a comment

The last conference, Biohydromet ’12 was attended by over 80 delegates from 22 countries (Conference Report: http://min-eng.blogspot.co.uk/2012/06/biohydromet-12-conference-diary.html).

This year’s conference features Keynote lectures by two of the most highly respected researchers in this field. Prof. Barrie Johnson, of Bangor University, UK, will present “Biomining in reverse gear: using bacteria to extract metals from oxidized ores“, and Dr. Corale Brierley, an internationally recognised consultant from USA will present the 2nd keynote, entitled “Integrating biohydrometallurgy in contemporary mine production“.
This conference will be run back-to-back with the 3rd International Symposium on Sustainability through Resource Conservation and Recycling (SRCR).

Short abstracts, of no more than 150 words, should be emailed to Dr. Barry Wills (bwills@min-eng.com) by the end of December 2013.

Biohydromet ’14 will focus on the latest developments in the field of biohydrometallurgy: the development, optimisation and application of integrated biomining process operations for mineral ores, including low grade and complex ores; the microbiology of biomining and the application of biohydrometallurgy to novel resources (such as mine and electronic wastes) and the (bio)remediation of mining-impacted environments.

2. The Microbiology of Biomining:

Posted in Acid Mine Drainage, Biohydrometallurgy, Mine and Mining Environment Biotechnologies | Leave a comment

Until I get my own report up, here is Barry Wills’ conference report. It was an excellent conference, I hope everyone found it worthwhile.

“Biohydrometallurgy ’12 (Biohydromet ’12), sponsored by FLSmidth and ProMine, with media sponsorship by International Mining was held at the St. Michael’s Hotel, Falmouth, UK from June 18-20. The following are my personal views on the conference, which I hope will be supplemented by the views of all who attended.”

The European Union imports huge amounts of metal. Yet buried deep in Europe’s bowels is a treasure trove of copper, zinc and other precious metals.

Researchers have been digging deep to uncover ways to put European mining back on the map and they’re not short of ideas.

Europe’s deepest metal mine is seemingly unfathomable, at 1,430 meters.

For forty years, Pyhäsalmi mine has been a rich source of copper, zinc and pyrites.

Interesting Article: Minerals Engineering – The future of biotechnology for gold exploration and processing

The future of biotechnology for gold exploration and processing

The role of biological agents in the mining industry is currently limited to the use of microorganisms in bioleaching and bioremediation. However, there are a number of ways in which biotechnology will be used in the near future to aid the mining industry. This review focuses on the development of novel biotechnologies and the role they will play in gold exploration, processing and remediation. The development of these biotechnologies has been enabled by advances in our molecular-level understanding of the role microorganisms play in the solubilisation, dispersion and precipitation of gold, brought upon by the rapid development of molecular genetic techniques over the past decade. This fundamental knowledge is now being used to develop new methods for gold exploration, processing and remediation. An understanding of the distribution of microbial species in soils overlying mineralisation can be utilised to develop bioindicator systems that assist with gold exploration. An in-depth knowledge of how microorganisms interact with gold complexes is being used to develop biosensors, further supporting exploration. Processing technologies are being improved based upon advances in our understanding of the interactions between microorganisms, cyanide and gold. For instance, cyanide-producing microorganisms are being investigated for use in situ leaching of gold. In turn, the use of cyanide-utilising microorganisms for the degradation of cyanide is being explored. Combined the implementation of biotechnologies in the gold mining sector is set to revolutionise the industry, leading to the greener, more efficient extraction of gold.

via ScienceDirect.com – Minerals Engineering – The future of biotechnology for gold exploration and processing.

MEI Biohydrometallurgy 2012 to be the biggest yet

We’re delighted to announce that there have been a record number of registrations for this conference so far, totally vindicating the decision to specialise uniquely on biohydrometallurgy. (The previous conferences in the series have been Bio & Hydrometallurgy.)

Registrations include a number of representatives of major industry and academic groups from around the world. I hope that this conference will provide an exciting interface leading to the communication and collaboration between industry and academia that is so important in the continuing development of this field.

Anyone who has yet to book accommodation should do so as soon as possible. Falmouth is always busy in the summer, and the loss of the Falmouth Beach Hotel (http://bit.ly/KYB6YC) has reduced the number of rooms available even further.

obo MEI and the Biohydrometallurgy 2012 consultants.

It has been an eventful few weeks for the MEI biohydrometallurgy 2012 conference.

First we’re very pleased to announce that FLSmidth have become the latest major sponsor of this conference. We look forward to welcoming their team to Biohydromet 2012, including Gaudin Gold Medallist Phil Thompson.

Secondly, you may have seen the recent news about the conference venue, the Falmouth Beach Hotel, which has been effectively destroyed by fire (http://www.bbc.co.uk/news/uk-england-cornwall-17897467). It is a terrible blow to Falmouth, but it is hoped that it will be rebuilt in the future. However, clearly that is unlikely to happen before June.

Fortunately, Barry and co at MEI have scoured the surrounds and an alternative venue has been secured. The conference will now be held at the nearby Hotel St. Michael’s (http://www.stmichaelshotel.co.uk/; http://g.co/maps/pfmgh). Clearly, if you were planning on staying at the Falmouth Beach Hotel, you will have to make alternative arrangements (http://www.min-eng.com/biohydromet12/acc.html). If you had already reserved accommodation at this hotel, it would be a good idea to contact Best Western (the hotel’s owners) for more information. In any case, it would be prudent to search for an alternative ASAP as Falmouth is very busy at this time of year and one of its larger hotels no longer exists.

The conference will go on! Please check http://www.min-eng.com/biohydromet12/updates.htmlfor the latest updates.

Conference registrations are looking good. We have a fantastic range of presentations on many aspects of biohydrometallurgy, both fundamental and applied. More information can be found here (http://www.min-eng.com/biohydromet12/timetable.pdf).

A reminder to all authors that they should register for the conference no later than 18th May. There are a number of papers waiting in reserve, and we are in the process of finalising the technical programme.

I’m looking forward to catching up with colleagues in this great field of work; both old friends and new.

Hope to see you there!